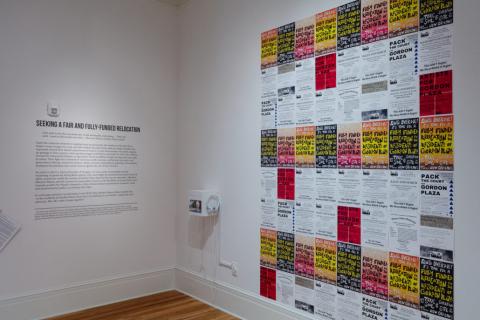 The American Dream Denied: The New Orleans Residents of Gordon Plaza Seek Relocation –organized by Tulane’s environmental studies students– explores the lived experiences of communities impacted by pollution, and its concomitant effects on health and environment.

In 1981, the City of New Orleans utilized funding from the U.S. Department of Housing and Urban Development to build the residential neighborhood Gordon Plaza in the Upper Ninth Ward on top of the Agriculture Street Landﬁll–a toxic waste dump that serviced the entire city for more than half a century.

“What was initially branded as a way for working class Black and African American New Orleanians to access the American Dream of homeownership turned into a nightmare as the residual outcomes of living on top of a landﬁll began to effect the residents in real and adverse ways – often having deadly conquences for those living there,” says Oliver. The exhibition – equal parts art show, social history, and critical visualization project – presents, in a myriad of ways, a chronological and visually engaging look at the residents’ ﬁght for a fully funded relocation with an emphasis on the role of women in activism, the effect on day-to-day living, and the frustrations of the “promised” American Dream.