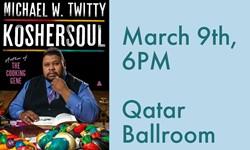 In this lecture, Michael W. Twitty considers the marriage of two of the most distinctive culinary cultures in the world today: the foods and traditions of the African Atlantic and the global Jewish diaspora. To Twitty, the creation of African-Jewish cooking is a conversation of migrations and a dialogue of diasporas offering a rich background for inventive recipes and the people who create them. The question that most intrigues him is not just who makes the food, but how the food makes the people. Jews of Color are not outliers, Twitty contends, but significant and meaningful cultural creators in both Black and Jewish civilizations. Kosher Soul also explores how food has shaped the journeys of numerous cooks, including Twitty’s own passage to and within Judaism.

Michael W. Twitty is a culinary historian and food writer from the Washington D.C. area. He blogs at Afroculinaria.com. He’s appeared on Bizarre Foods America with Andrew Zimmern, Many Rivers to Cross with Henry Louis Gates and most recently Taste the Nation with Top Chef's Padma Lakshmi. HarperCollins released Twitty’s The Cooking Gene, in 2017, tracing his ancestry through food from Africa to America and from slavery to freedom, a finalist for The Kirkus Prize and The Art of Eating Prize and a 3rd place winner of Barnes & Noble's Discover New Writer's Awards in Nonfiction. The Cooking Gene won the 2018 James Beard Award for best writing as well as book of the year, making him the first Black author so awarded. His piece on visiting Ghana in Bon Appetit was included in Best Food Writing in 2019 and was nominated for a 2019 James Beard Award. His next book, Rice became available through UNC Press in 2021. Kosher Soul, his follow up to The Cooking Gene, will be out in 2022 through HarperCollins. Michael has a hit spice line based on The Cooking Gene and a recent special guest appearance on Michelle Obama's Waffles and Mochi show on Netflix.


For more information on this event, please visit https://tulane.campuslabs.com/engage/event/7916458