A Conversation with Lynn Nottage 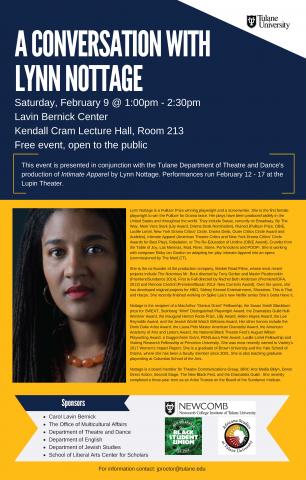 The Department of Theatre and Dance welcomes you to join a lecture by critically acclaimed, award winning playwright  Lynn Nottage to Tulane University for “A Conversation with Lynn Nottage.” Ms. Nottage has earned numerous awards, including two Pulitzer Prizes (Sweat and Ruined), the Lilly Award (By the Way, Meet Vera Stark), Drama Desk Nomination (Sweat and By the Way, Meet Vera Stark), Drama Desk Award (Ruined), the Obie Award (The Re-Education of Undine), American Theatre Critics Award for Best Play (Intimate Apparel), and several others. Ms. Nottage is also a writer/producer on the acclaimed Netflix drama series She’s Gotta Have It, directed by Spike Lee. Additionally, she is the recipient of the MacArthur “Genius Grant” Fellowship, Steinberg “Mimi” Distinguished Playwright Award, Merit and Literature Award from the Academy of Arts and Letters, and many more.

Ms. Nottage’s extensive corpus, which explores the meaning of race, diversity, and inclusion in face of fluid and often conflicting understandings of these issues in American society, aligns closely in focus and intent with Tulane University’s shared commitment to diversity and inclusivity. Ms. Nottage’s work investigates, interrogates, and celebrates the ways in which meaning is constructed and performed in the theatrical event. Through this exploration of the event, her plays function as a dramatic construction of the intersectionality of identity, gender, economic and social hierarchy, and race.

On February 12-17, 2019, The Department of Theatre and Dance will present Ms. Nottage’s Intimate Apparel.

This event is free and open to the public. Join us!

This event is sponsored by: The Department of Theatre and Dance, the Jewish Studies Department, the Department of English, School of Liberal Arts Center for Scholars, The Office of Multicultural Affairs, Carol Lavin Bernick, Black Student Union, Newcomb College Institute, and Africana Studies at Tulane University.