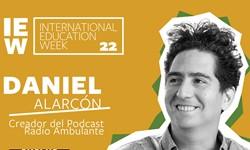 Daniel is a Peruvian-American writer, journalist, professor, and radio producer. Professor of Journalism at Columbia University and MacArthur Fellow (‘21). Daniel’s work explores the social, cultural, and linguistic ties that connect people throughout Latin America and the United States.

Author of Lost City Radio (2007), At Night We Walk in Circles (2013), The King is Always Above the People (2017). He is also a contributing writer at The New Yorker, where he covers Latin America.

Daniel is the Co-founder of the renowned podcasts Radio Ambulante and El Hilo, both a collaborative and transnational enterprise integrating stories from 20+ countries and resulting in more than 8 million downloads a year. These interactive audiovisual platforms have also become a widely used educational tool for journalism and Spanish classes.

Daniel Alarcón is this year’s speaker for the School of Liberal Arts Bobby Yan Lectureship in Media and Social Change, which is part of the Tulane Trailblazers initiative, celebrating the contributions of people from diverse backgrounds who have made a substantial and lasting impact at Tulane. The lectureship is named after seven-time Emmy Award winner Bobby Yan, a 1995 Tulane graduate who founded Tulane’s Asian American Student Union.

Daniel also joins this year’s Distinguished Greenleaf Lecture Series sponsored by the Center of Inter-American Policy and Research and the Stone Center for Latin American Studies. The series focuses on the importance of investigative journalism for democracy highlighting how Latin American journalists have taken advantage of the same technological trends affecting print journalism to create new spaces where they can continue fulfilling the journalistic mission of ensuring transparency and accountability.


For more information on this event, please visit https://tulane.campuslabs.com/engage/event/8516601