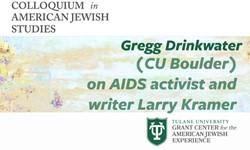 Writer and AIDS activist Larry Kramer, who died in 2020, helped define the content and context of much of the public AIDS activism in the United States of the 1980s and 1990s. In addition to co-founding Gay Men’s Health Crisis and ACT UP, Kramer disseminated his views on AIDS through a series of fiery public speeches, widely-circulated and incendiary essays, and celebrated plays that centered the AIDS crisis. Throughout, Kramer frequently promoted analogies between AIDS and the Holocaust, arguing that AIDS represented a genocidal assault on gay men and other marginalized populations. Some of Kramer’s fellow activists (and fellow Jews) questioned Kramer’s analogies between AIDS and the Holocaust and refused to take his Holocaust language seriously. They often presumed that Kramer linked AIDS and the Holocaust as a strategic and attention-seeking political tool. I argue, in contrast, that Kramer turned to the history and memory of the Holocaust, and in particular, to the political philosophy of Hannah Arendt, to help him theorize the AIDS epidemic as a call to action. Kramer’s linking of AIDS and the Holocaust stemmed from his deep engagement with Arendt’s life and work, and his recognition of similarities between the antisemitism that inspired Nazi genocide against Jews and the homophobia that fueled inaction in the face of an epidemic initially centered on gay men. Join me for a discussion of a work in progress tentatively titled: "Larry Kramer’s Holocaust: AIDS, Hannah Arendt, and the Moral Imperative of Political Action.

Attendance is limited at 20 people due to COVID regulations and room space. if you would like to attend, please contact the Ilana McQuinn, Program Manager of the Grant Center for the American Jewish Experience (milana@tulane.edu).


For more information on this event, please visit https://tulane.campuslabs.com/engage/event/7456908