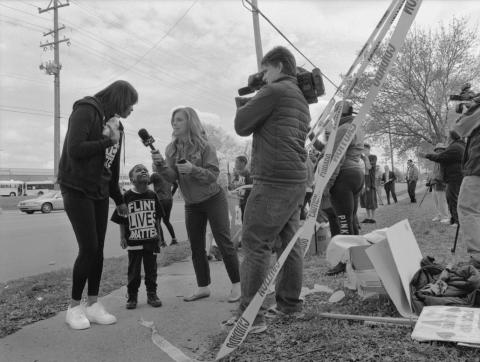 In 2016, artist, activist, and MacArthur genius awardee LaToya Ruby Frazier spent five months living in Flint, Michigan with three generations of women–the poet Shea Cobb, her mother Renee, and daughter Zion–observing their day-to-day lives as they endured one of the most devastating ecological disasters in US history: the water crisis in their hometown. The artistic result of Frazier’s time there is reflected in the works presented in “Flint is Family,” opening August 2019 at the Newcomb Art Museum of Tulane University.

“Through photographs, videos, and text I use my artwork as a platform to advocate for others, the oppressed, the disenfranchised,” says Frazier. In “Flint is Family,” Frazier explores at the level of community, the effects of the water crisis in Flint–where black residents make up 54% of the population and 40% of the population lives below the poverty line. “When I encounter an individual or family facing inequality, I create visibility through images and story-telling to expose the violation of their rights.”

By portraying the daily struggles of the Cobb family, Frazier used a tight focus to create a story about the impact of a systemic problem disproportionately affecting marginalized communities. Citing the social documentary work of Gordon Parks’ and Ralph Ellison’s 1948 “Harlem is Nowhere”–which highlighted the social and economic effects of racism and segregation–as an influence, Frazier rejected the voyeuristic photographs that emerged from outside media sources and instead collaborated closely with her subjects through photographs, capturing intimate moments along with the myriad challenges the family faced without access to clean water.

In September 2016, Frazier published her images of Flint in Ellemagazine in conjunction with a special feature on the water crisis. Like Parks, Frazier used the camera as a vehicle and agent of social change.

“By hosting the Louisiana premiere of Frazier’s work at the Newcomb Art Museum,” says Monica Ramirez-Montagut, museum director, “we are bringing meaningful, enriching, and transformative exhibitions of socially-engaged art that explores the concerns of communities both on and off campus, as well as recognizing underrepresented communities and the contributions of women to the field. Frazier’s artistic practice centers on the nexus of social justice and cultural change and tells an important story of the American experience that certainly echoes with our own Louisiana environmental crisis and pollution.”