Live From the Lab Series: NEVA 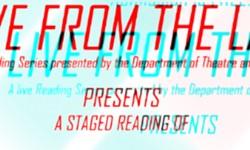 About the Play: In a gorgeously crafted reflection on life, art and the revolutionary impulse, Chilean writer-director Guillermo Calderón's NEVA tells the story of Anton Chekhov's window, the actress Olga Knipper, who arrives in a cold and dimly lit theater in St. Petersburg in the winter of 1905 to rehearse The Cherry Orchard. As she and two other actors await the rest of the cast, they huddle together, act out scenes from their lives and muse on their art form and on love - while, unseen, striking workers are being gunned down in the streets by the Tsarist regime during what will be known as bloody Sunday. Political and human, haunting and fresh, this smart, thrilling and often humorous ensemble work will envelop you just as you least expect it and stir what it means to create art in violent times.

Department of Theatre and Dance


For more information on this event, please visit https://tulane.campuslabs.com/engage/event/7846755