Looking at Skin, Looking into the Heart: From Devotional Practices to Advice for Kings 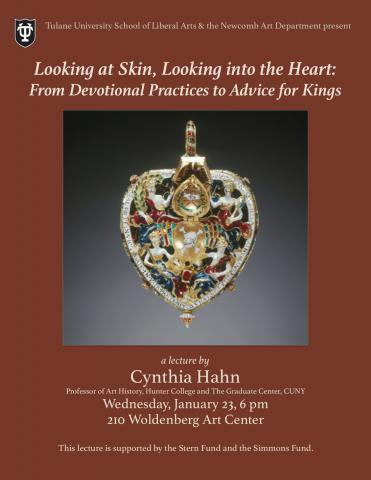 Professor Cynthia Hahn teaches medieval art at Hunter College and The Graduate Center, CUNY. She has published on material from the early Christian period to the Gothic, from across Europe to the Eastern Mediterranean. Her books include Portrayed on the Heart: Narrative Effect in Pictorial Lives of the Saints from the Tenth through the Thirteenth Century, University of California Press, 2001, Strange Beauty: Origins and Issues in the Making of Medieval Reliquaries 400-circa 1204, Penn State University Press, 2012, and The Reliquary Effect: Enshrining the Sacred Object, Reaktion Press, London, 2017.

This lecture is supported by the Stern Fund and the Simmons Fund.