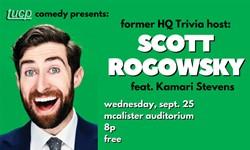 A fun night of comedy presented in a unique game show format! You knew him as the host of the hit Live Trivia app, HQ Trivia, Scott Rogowsky will be doing a fun evening of stand-up and laughter for the Tulane community! Doors will open at 7:15 pm.

Scott Rogowsky is quickly making a name for himself across the media landscape. Whether you know him as the host of the wildly popular live mobile game show HQ Trivia, or have streamed one of his two shows currently airing on Verizon’s Go90 – Start Talkin’ produced for Complex Networks and Weird World of Sports produced for Whistle Sports, he is seemingly popping up everywhere. Prior to joining HQ, Scott co-hosted the ABC Primetime series Would You Fall For That? with Nick Watt and Sasheer Zamata.

Scott is also a talented writer and producer.  He has produced Debate Wars for Seeso and Crowd Goes Wild on Fox Sports 1 and has written for The Onion News Network on IFC and Onion SportsDome on Comedy Central. He has also produced, written, and/or starred in several viral videos including “Mother’s Day Lie Detector” (17 million YouTube views) and the “Fake Books on the Subway” series which has been viewed over 200 million times across YouTube, Facebook, and Instagram.


For more information on this event, please visit https://tulane.campuslabs.com/engage/event/4939946