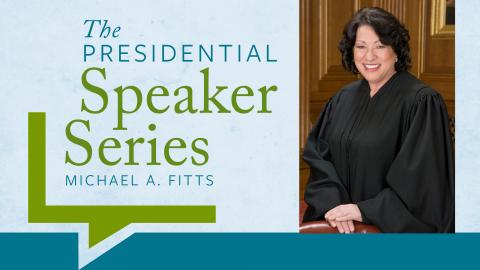 Tickets to the conversation with Justice Sotomayor are available to the Tulane community and all guests will have to present a current Splash Card upon entry. Doors will open at 3:30 p.m.—guests must be seated by 4:40 p.m.

She then litigated international commercial matters in New York City at Pavia & Harcourt, where she was an associate and then partner from 1984–1992. In 1991, President George H.W. Bush nominated her to the U.S. District Court, Southern District of New York, and she served in that role from 1992–1998. She then served as a judge on the United States Court of Appeals for the Second Circuit from 1998–2009.

President Barack Obama nominated her as an Associate Justice of the Supreme Court on May 26, 2009, and she assumed this role August 8, 2009.


Tickets are Required
Tickets are free and open to the Tulane community. Guests must show a current Tulane Splash Card upon entry.
Please purchase tickets at http://tulanetickets.com
For more information on this event, please visit president.tulane.edu/speakerseries