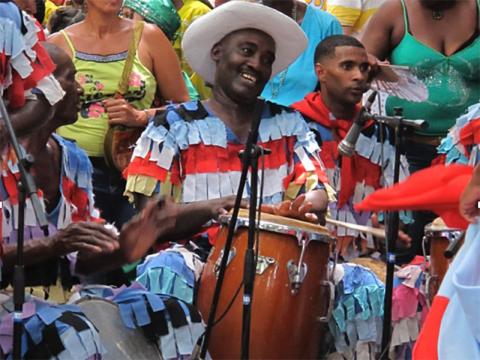 One event featuring two presentations on the migrations of the Vodou religion.

Cuba’s Haitian-Heritage Communities: Vodú, Religious Practice, Music, and Performance Cuba has been home to a Haitian cultural community since the early decades of the 20th century. Immigrants from the nearby island brought with them their religious practices, their foodways, their dress, and their music and dance. Heidy Cepero Recorder explores the ways in which their descendants continue to practice a unique form of the Vodú religion, in which music plays a critical role. Presentation in Spanish with English translation provided.

Heidy Cepero Recorder is an assistant professor at the University of Arts Cuba, ISA, and a researcher at the Center for the Research and Development of Cuban Music, CIDMUC.

Expressions of Voodoo and Vodou in New Orleans Haitian religion manifest in myriad forms in New Orleans popular culture. Grete Viddal discusses how we can interpret these appropriations of spiritual practice in local commerce and counter-culture.

Grete Viddal is an independent scholar working and writing in New Orleans since 2015. She holds a Ph.D. in African American Studies from Harvard.


For more information contact: Cuban and Caribbean Studies Institute via email to ccsi@tulane.edu or by phone at 504-862-8629
For more information on this event, please visit http://cuba.tulane.edu/articles/detail/3069/Vod-Voodoo-Vodou-Manifestations-of-Haitian-Religious-Practice-in-Cuba-and-New-Orleans